View Trip 7: The North East in a larger map

This was a huge trip – 466 miles in one day. I set off at 9.45 am and after stopping to talk to a friend that I passed in the street, it was probably about 10.15 before I even got on the M8 motorway out of Glasgow. We’d been having a heat wave for the previous 2-3 weeks but the weather seemed to have finally broken as I left Glasgow and made my way north up the M80 to Stirling and then the M9 to Perth. 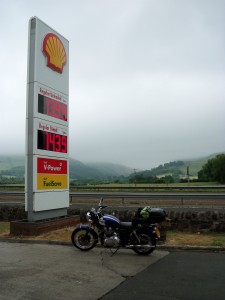 Nonetheless, I was in Dunblane by 11 am so it looked as if I’d cover my route quite quickly. From Perth I continued on the A9 to Dunkeld where I took the very picturesque, but somewhat twisty, B923 to Blairgowrie. When I arrived in Blairgowrie, the A93 from Perth crossed my path. Funny? This was the road I intended to take to Ballater, could it be that I could have taken this all the way from Perth instead of weaving my way on a back road? Not to worry, I’d got there in the end.

Having found the A93, I now took this up towards Glenshee, one of Scotland’s ski resorts. I’d been this way before when I was a youth, and kept expecting to recognise it, but I might as well never have taken this road before, as it all seemed new to me. It was beautiful though, even though the authorities seemed to think it was a bit dangerous for motorcyclists. 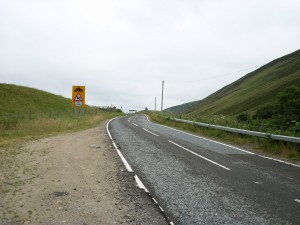 Getting up to the ski fields, suddenly everything seemed familiar. Sunnyside to the right, and the Tiger to the left – happy memories came flooding back. 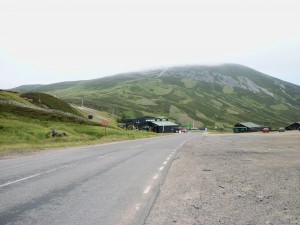 Getting over the top of the pass, the sun came out and stayed with me for the rest of the day. 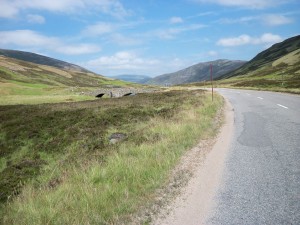 As I followed the road round to Ballater, the smell of pine trees filled the air, castles poked over treetops and rivers babbled alongside me. Suddenly I found I was smiling contentedly.

Ballater, like most of the towns in this area, was a pretty little place with charming granite houses and a well presented village square. 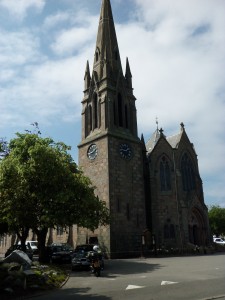 Next I took the A939 to Tomintoul. I love the place names in Scotland – Auchterarder, Findo Gask, Ballindalloch. The A939 has got to be my favourite road so far. Golden fields of wheat: 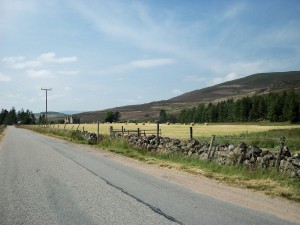 Harvest time on the A939 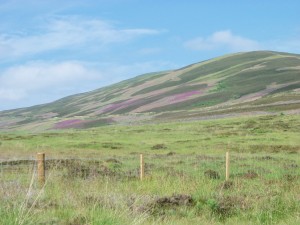 A carpet of purple heather

And, another ski resort. So this is where The Lecht is! 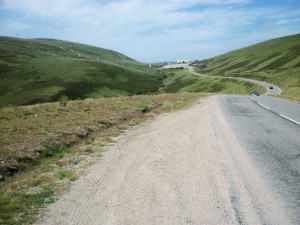 From Tomintoul I was going to take the B9136 to Ballindalloch but it was closed so I had to divert to Grantown on Spey. From here the A95 took me all the way through to Keith. This is whiskey country and the road was littered with distilleries. At Aberlour the smell from the Walkers shortbread factory almost drove me insane – I’d only had a glass of fruit juice and a Greek salad all day and was starving by now.

A quick trip up the B9016 brought me out near Buckie, on the Moray Coast. I turned onto the A96 and followed it till the turning for Lossiemouth. As I rode into the town, the most almightly roar broke out and just as I was thinking, “What the hell was that?” I saw a Tornado fighter jet rocketing through the sky above me. The RAF have a base here. On the way out of town, I saw another Tornado in a petrol station car park looking somewhat less impressive: 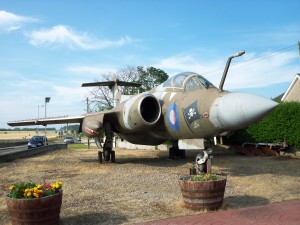 All day I’d been swithering about whether I should camp overnight but as I reached Elgin the clock tower said it was 6.35 pm and a gantry sign said “Heavy Rain Forecast Tuesday”. That did it. I wasn’t going to camp if it meant packing up wet and riding home in the rain, so I spent the next 4 hours, racing down the A9 home again. A quick stop in Aviemore for fuel and another in Pitlochry for chips (it was 8.30 pm and this was the first food I’d had since an ice-cream in Keith) and I was back on the road. By the time I got to Perth the light was fading fast. By Stirling it was pitch black. My visor was covered in bug splatter and I could hardly see a thing. Thankfully I made it back to Glasgow in one piece at 11.15 pm but what a day!

If you’re enjoying reading this blog, then please help me reach me raise £5,000 for charity by donating using the JustGiving link below. You can find out more about my “5K for £5K Challenge” here. Thank you.

For this trip I decided to go all the way down the west coast to Stranraer. I’d been as far as Girvan before, but never all the way.

There are three routes you can take from Glasgow, 1) all the way round the coast via Gourock, 2) inland down the A737 to Irvine, or 3) go the whole way on the A77. The forecast was for fine weather so it had to be the coast road. It had been a few years since I’d last been that way and there had been some changes. All the old ship yards between Port Glasgow and Greenock were gone – a few cranes were left – but now a vast superstore had replaced what used to be Scott Lithgows (I think) and many of the old warehouses had been converted into trendy flats.

It was hazy for most of the way along the Clyde estuary. 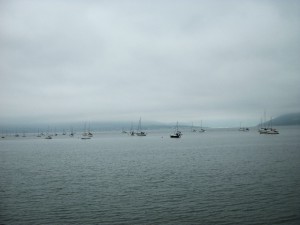 Rounding the bend at Gourock things began to clear and by Irvine things were brightening up considerably. At Ayr, I missed the turning for the A77 and somehow managed to get myself onto a back road and ended up taking a rather convuluted route to Turnberry where the two roads joined. 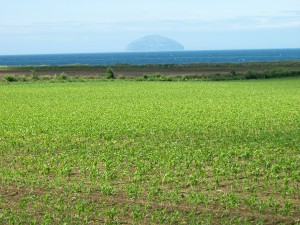 Ailsa Craig from A77

A quick stop in Girvan for lunch and to admire the only sandy beach I’d see all day. 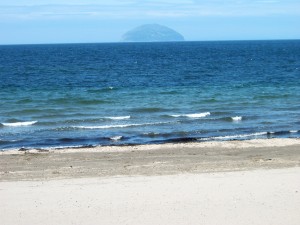 From here it was a clear run all the way to Stranraer. At Cairnryan I noticed there was a nice new terminal for Stena Lines’ crossings to Belfast. Funny, I thought they went from Stranraer. 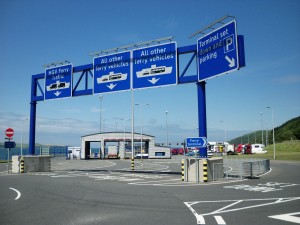 A mile or so on was the P & O terminal to Larne. Strange, could have sworn the ferries went from Stranraer.

In Stranraer the mystery was solved, the Stena Line terminal had been closed down and moved to Cairnryan. 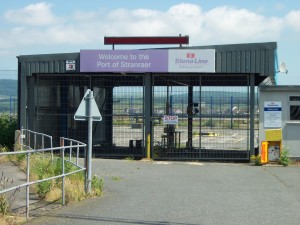 The old ferry terminal at Stranraer

By this time I was bursting for the loo, so I enquired at the Police Station where I might find a public convenience. “The Library” I was informed. I set off in search of this only to discover it was closed. The Tourist Information Office was over the road so I asked if there was another one. “Take a right at the ??? Hotel, then right again, right again, and Morrison’s have one there”. Great, but what was the name of that hotel again? Passing one that seemed like it might be the right one, I turned right. Obviously not, and before I knew it I was on the road out of town to Dumfries. “All right”, I thought, “let’s try Newton Stewart instead.”

The Gulf petrol station in Newton Stewart had a very nice toilet, so all was well. From here I took the A712 to New Galloway – a beautiful road winding through the Galloway Forrest. At New Galloway, after a few wrong turns, I found my way onto the A702 to Moniave. 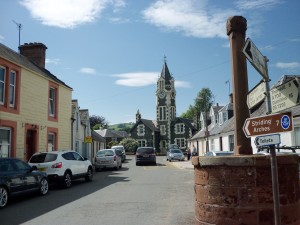 From here I did a quick loop up to Penpont then took the B729 from Moniave across to the A713 at Carsphairn. A beautiful, deserted road which oscilated between two lanes and single track. As I came round a bend a small loch was to my right and a family of geese was crossing the road directly ahead of me. I stopped to let them pass and scrambled to get my camera out to take a photo of them, but I wasn’t quick enough and this is the best I could manage (click on the photo to enlarge). 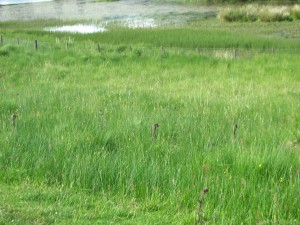 The A713 took me all the way back to Ayr where I picked up the A77 back to Glasgow.

If you’re enjoying reading this blog, then please help me reach me raise £5,000 for charity by donating using the JustGiving link below. You can find out more about my “5K for £5K Challenge” here. Thank you.