Woohoo, my book, “Excess Baggage” is now available in Kindle format. Click below for details:

The forecast was for fabulous weather this weekend so being a rare event in Scotland I decided to do an overnight trip to Skye. Not wanting to abandon my cat without food or water, I went to the pet shop and got him a food dispenser. A trial run proved it worked, so I filled it up with food and set off.

I collected my bike from my friend’s house then came back to mine and loaded it up with camping gear. As I was doing this, I realised I’d left my camera in my bag at my friend’s. Darn! I couldn’t go to the jewel in Scotland’s tourist crown without being able to take photos so twenty minutes was lost returning to her’s to get it.

Camera retrieved I went up the A82 again (just as well it’s such a gorgeous road as this was the third time I’d been up it in two months). Through Glencoe again and on to Fort William where I joined the Road to the Isles. This is one of my favourite roads – a long straight stretch runs parallel with the railway along the side of Loch Linnhe, then it heads over a hill to Glenfinnan, past the monument and the railway viaduct (featured in the Harry Potter films). I’d forgotten it was there so had a quick stop to refresh my memory. 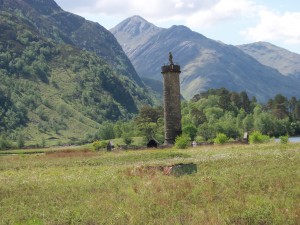 From there the road continues west a bit further then heads north to Mallaig, affording fabulous views of white, sandy beaches and the isles of Rum, Eigg and Muck beyond. 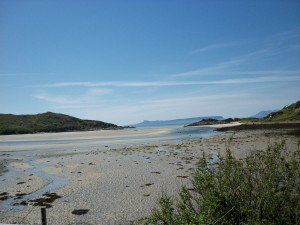 Morar beach with Small Isles in the background

I had a three hour wait in Mallaig as I hadn’t booked the ferry and the next two were full. It was glorious sunshine though so I wandered about, soaking up the rays and taking in the views. 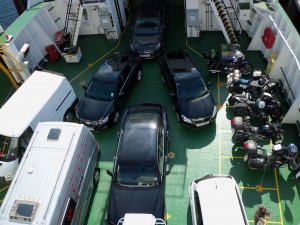 I made it to Skye by 5.30 pm and took the southern road to Dunvegan on the west side, passing by the foot of the Cullins. These are spectacular jagged peaks that rise far above everything else and can be seen from all angles of the island. 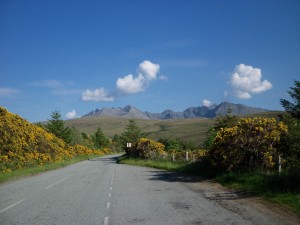 Arriving in Dunvegan I made my way to the Kinloch Campsite, a beautiful spot right on the coast. I pitched my then, then made something to eat. There is something supremely satisfying about making a meal using a camping stove. Maybe it brings out those “hunter gatherer” instincts, but I swear, my simple meal of pasta, pasta sauce and bacon, was the best thing I’ve ever tasted. So was the cup of tea that followed it. 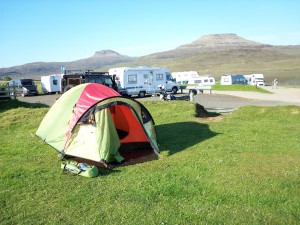 Next morning I was up at 6 am. I couldn’t sleep anymore. In fact, I’m not sure I ever really slept. I just seemed to creak from one solidified position to the next. Camping is a great idea in theory, but the reality is that I’m getting far too old and stiff for it. 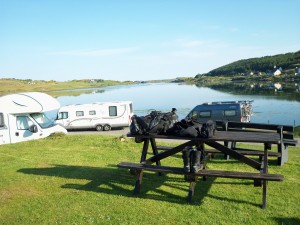 What a view to wake up to!

The midges were out in droves so I quickly rustled up some breakfast in the wash-house to try and get away from them, then packed up and was on the road again by 8 am. I headed south west along a single track road to Galtrigill where the road runs out. A group of cows protecting a calf prevented me making it all the way to the end, so I turned around and took another single track over to Glendale, a typical island village. 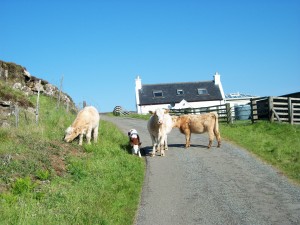 Cows warding me off 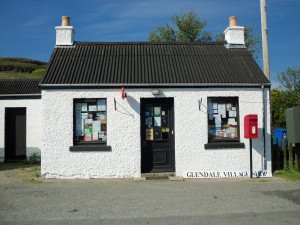 Next, I wanted to get the ferry from Kylerhea to Glenelg, back on the mainland. This time I took the northern road from Dunvegan, past Portree to Broadfoot where, a few miles later, I picked up the road to the ferry. Now I’ve done some small, twisty single track roads in my time, but this one was exceptional. As you get to the top of the pass you get the most spectacular view down to the narrows below. The road then descends down a near vertical track to the slipway at the bottom. 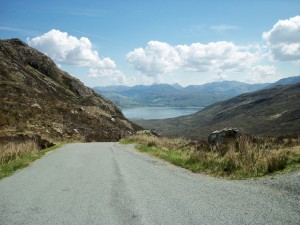 View from top of pass to Kylerhea narrows below

The Kylerhea – Glenelg ferry is the oldest crossing in Scotland and is serviced by the last ferry of its type – one with a rotating deck. The water in the narrows moves very quickly and the ferry has to cross it at an angle so that by the time it arrives it has been swept back to the right level to dock. 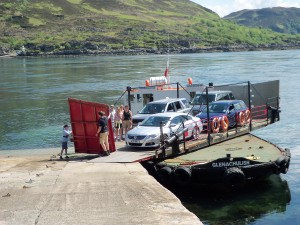 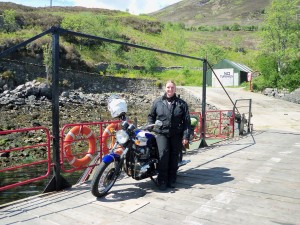 Me, on board the ferry

Having been safely delivered to the other side, I followed the road from Glenelg all the way to its end. Another winding single track up through pine forests and along rugged shorelines. A fine journey, but possibly a step too far as I was starting to get very tired now. The road was a dead-end so I had to retrace my steps back to Glenelg before I could pick up another single track to Sheil Bridge where I rejoined the main road through Glen Garry to Invergarry. From here the A82 took me south through the Great Glen. This should have been a fairly quick piece of road but my progress was impeded by hundreds of cyclists (six-hundred to be exact). At a stopping place outside Spean Bridge I discovered they were all doing the John O’Groats to Lands Ends (or JOGLE as it’s commonly know) ride. I didn’t quite get to the bottom of why they were doing this, but as they all seemed to be stopping here, I got back on the bike and continued to Fort William.

From here it was back down the A82 through Glencoe, down to Tyndrum and back along Loch Lomond to Glasgow. I got home at 7 pm having covered 499 miles. Cozy had survived his time without me but I noticed he actually let me pick him up and sat happily on my lap while I stroked him – something he never normally does. It’s always difficult to tell what cats think of you but I think he was relieved to have me back – as was I.