This trip’s destination was Ardnamurchan, the most westerly point on mainland Scotland. The sun was shining so I leapt out of bed and was on the road by 8.45 am. Straight up the side of Loch Lomond on the A82 until Tarbet where I took the right fork and continued on the A82 to Tyndrum. A quick stop in the Green Welly then onwards on the A82 to Glencoe. After Bridge of Orchy the road starts to climb. There’s a fabulous lookout half way up so I stopped there to take a photo and met a couple of guys on bikes who were on their way to Inverness. 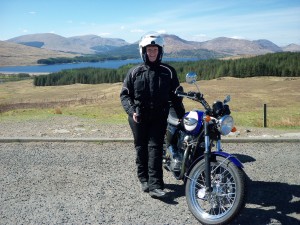 Me at the Bridge of Orchy viewpoint

From there, the road passes through Rannoch Moor before entering into Glencoe itself. I think the word “awesome” is so over-used these days it loses its meaning, but it is absolutely the right word to describe Glencoe. Huge, sweeping peaks rise up on either side. Depending on the weather, it can be either deathly eerie or jaw droppingly spectacular. The latter was the case today. 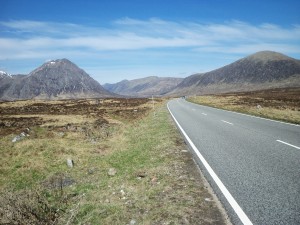 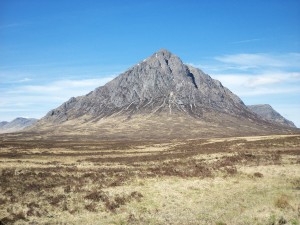 Next stop was Inchree to get the ferry to Corran. It’s only a short crossing – you can see the slipway on the other side – in fact, the wait was longer than the crossing itself. Then I was off. Miles and miles of single track roads through groves of lime green trees rising up and down along the coastline. It’s one of my favourite routes. 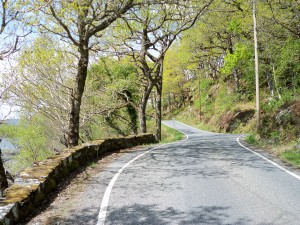 At Salem I turned left onto the Ardnamurchan peninsula itself and followed it over undulating moorlands (where I saw two deer) round to Kilchoan.

My plan was to catch the ferry from there to Mull, then head down to Craignure where I was booked on the 7 pm ferry to Oban. It was 2.30 pm by now and the next ferry from Kilchoan was at 3.15 pm. If I was quick, I could make it up to the lighthouse and back in time to catch this connection. It was only 6 miles each way, but on twisty single track roads, it was going to be a challenge to make it in time. But I liked a challenge, so I fired up the bike and headed off.

There’s not many times I ride like a racer, but now was one of them. I was charging along, fleeing around corners, gunning it up hills and bombing along straights. I should have realised it wasn’t a good strategy for these type of roads, and soon I was to get my comeuppance. As I came hurtling round a bend, I lost my line, crossed onto the wrong side of the road and ploughed into a two foot long pothole in the verge. My left foot flew off its peg as the bike crashed into the hole and slammed down on the tarmac smashing my toes. Momentum carried the bike out the other side and back onto the road surface but it lurched left and right and I thought I was going to lose it. Then, as quickly as it all started, it stopped. The bike righted itself and I was able to carry on.

I should have paid heed to the warning though. I was tired and hungry and needed a rest, but I was almost there, so I would get a rest in a minute. 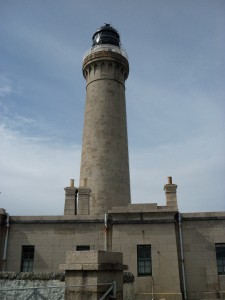 When I arrived at the lighthouse, the road passed two car parks then circled the lighthouse. The sensible thing to do would have been to park in one of the car parks, but not thinking very clearly, I rode past these and started riding round the lighthouse. It was a gravel track, something that would usually have put the fear of God into me, but this shows how tired I was becoming as I didn’t even notice it and started riding round the base. Next thing I knew the bike was on the ground. I’d hit the edge of a raised drain and the whole thing got thrown over. I don’t even remember if I fell off or got thrown from the bike. All I knew was the bike was on the ground and petrol was flowing out of the tank. I needed to get it back up before the heat from the engine ignited it. Amazingly, the engine had switched itself off, but it was not a good situation. I tried to remember all the videos I’d watched on picking up a fallen bike, but my mind went blank. I needed assistance, so I went off to the museum, found a couple looking at the exhibits and asked for their help. Together, the three of us, got it upright again but I’d broken the right front indicator and the mirror had been bashed off at an angle that no amount of pushing and pulling would release it from. 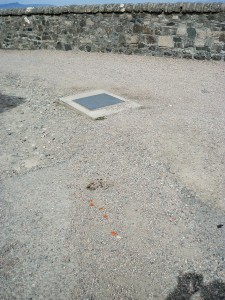 Scene of the crash – remains on my indicator in foreground

It was time to stop. I was trying to cram too much into my day. I parked the bike in the car park and had some lunch in the cafe. So, it had finally happened – I’d lost control, twice in a row. My foot felt like I might have badly bruised my toes but otherwise I was unscathed.

Needless to say, the ride back to the ferry was a much calmer affair. I was early so I amused myself by setting up my tripod and taking a picture of myself using the self-timer for the staff magazine at work. 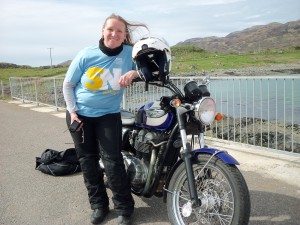 Waiting for the ferry at Kilchoan

I arrived in Mull at 5.30 pm. My next connection was 7 pm from the other end of the island. I had no idea how far it was, so learning nothing from my near miss, I hurried on down the single track road south from Tobermory. Everyone was going in the opposite direction and no-one was giving way to me and I was having to stop continually. All I could see in my right mirror was my own face (a somewhat disconcerting sight) which meant I was pulling out blind from every passing place. When I finally got to Salen, half way down, I saw a sign saying it was only 13 miles to Craignure. The road expanded into two lanes here so I was able to slow down, relax and take in some of the fabulous views around me.

I got the ferry terminal at 6 pm. Three cyclists arrived shortly after me and started chatting. Then an American man called Chuck pulled up next to me and told me he had a Bonneville America but wished he’d just bought the regular Bonny as he didn’t like the handling of the America. When I told him about my crash, he then heaved my mirror back into place which made the final run home to Glasgow much safer. 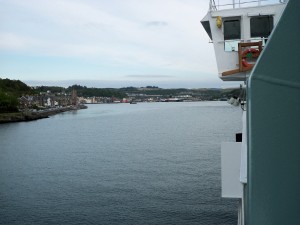 The ferry to Oban was late so it was 8.15 pm before we docked. Already the light was fading so I just had to blast it all the way home, eventually arriving at 10.40 pm. It had been a marathon of a day and made me question the wisdom of my idea to visit all destinations on this Challenge within a day.

It was low cloud and drizzle when I got up and I almost decided to call off my trip and leave it to another day, but a challenge is a challenge and if you cry off every time it’s raining, then you’d never go anywhere in Scotland. So I donned my gear, started up the bike and headed for Falkirk.

By the time I got onto the M80 north the rain was torrential. Low cloud reduced visibility to about 50 feet so the ride to the Falkirk Wheel was horrible and I was dripping wet by the time I got there. I parked the bike and set off to find the Wheel. As it came into view my gaze was drawn skywards to the huge structure looming above me. The next thing I knew I was flying through the air and landing on my arse in a flower bed. Someone had left a tangerine on the pavement and, like the proverbial banana peel, I’d slid on it and went flying. I was now soaking wet AND covered in mud. Not the best start to the day. 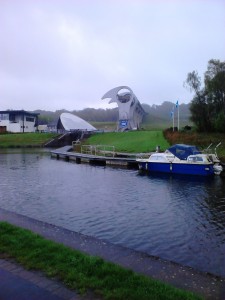 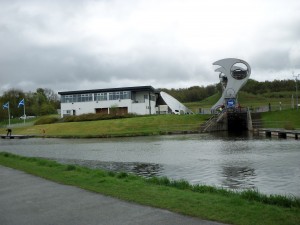 Falkirk lies in the Central Belt, an area that covers about a 50 mile stretch between Glasgow and Edinburgh. Given it’s so close, it’s an area I’d never really explored before. However, today I needed to find a landmark in connection with the Round Britain Rally that I was participating in, and as Yvonne Harley from MAD Scotland had contacted me via Twitter about my book, and invited me to look her up if I was passing, I’d asked her if she could show me the way.

When Yvonne arrived, we had a quick chat then headed into Falkirk. Yvonne was an excellent rider who looked like she’d been riding bikes all her life (which, it turned out, she had). She led me through large industrial estates with more car showrooms than I’ve ever seen in my life, before we reached a residential area which led to the park where the landmark was located. Landmark found and photographed, we headed off to South Queensferry to visit the Bikers Cove cafe.

Falkirk is clearly in the middle of Scotland’s industrial heart-land. The town sprawls for several miles and seems to blend with the edges of Grangemouth, where a huge refinery is based. Massive cooling towers scrape up into the skyline for mile after mile. I followed Yvonne as she navigated us onto the A904 to Bo’ness, a much prettier, residential town, lined with stone villas overlooking the Firth of Forth in the distance. Another turn a few miles later and we joined a coast road which gave spectacular views of the Firth of Forth and the road and rail bridges ahead of us. A quick stop in a parking bay for some photos and we continued down into South Queensferry. 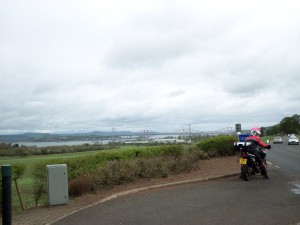 The Bikers Cover cafe is a tiny, little cafe with a big, friendly atmosphere, right at the foot of the railway bridge. I was introduced to Trish and Chas, the owners and plied with tea and a bacon roll. There was a fun crowd of people there so we spent the next hour or so chatting to anyone that came in. 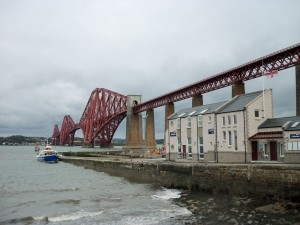 Forth Rail Bridge from South Queensferry 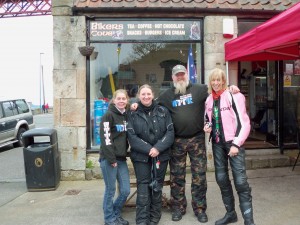 Tricia, Me, Chas and Yvonne at Bikers Cove

On the return trip, Yvonne detoured into Grangemouth so I could get a better view of the refinery. The road weaves right through the plant and I found it quite awe-inspiring passing through such massive structures. We stopped to see an old Spitfire that had been erected at the roadside, then we parted ways and I started to make my way home. 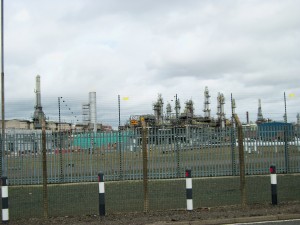 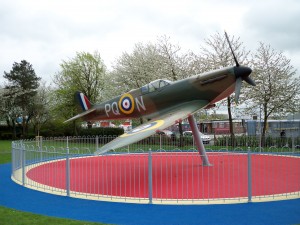 Beyond the refinery, Grangemouth becomes a vast industrial estate, flanked with factory units, warehouses and storage yards. I had no idea so many industrial plants were located here. So this is where Scotland’s manufacturing hub is located.

From Grangemouth I joined the M9 then the M80 back towards Glasgow. The wind was very blustery by now and I was getting buffeted across the carriageway so I took the back road from Cumbernauld down through Kirkintilloch to Glasgow.

Despite initial impressions, it had been a brilliant day and I was really grateful to Yvonne for her company and showing me around (click here to read Yvonne’s account of our day). 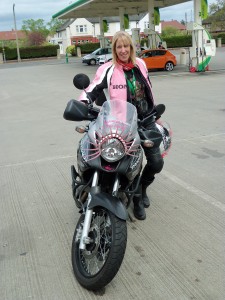